Everything Travel Nurses Want to Know About Bill Rates

Even new travel nurses are usually aware that they’re paid one amount, but the travel nurse agency bills the healthcare facility where they perform their nursing duties at a higher rate. However, you may not understand why there’s a difference and where that difference goes. Some may assume the agency pockets the entire difference and feel they’re getting short-changed. While agencies do receive a profit, it may not be nearly as much as you think. This guide tackles the mysterious bill rate and offers an overview of where the money goes and why with some inside information from a former traveler and current travel nurse agency CEO who understands both sides of the coin.

What Are Bill Rates?

The bill rate is the total amount travel nurse agencies charge a healthcare facility for supplying them with a travel nurse to fill a specific role. This rate isn’t the same as the pay rate, which is the amount the travel nurse actually receives. The markup is the difference between the two rates.

“It’s important to understand that the bill rate doesn’t mean the pay rate for the clinician,” emphasized Jeremy Commisso, former cath lab and critical care travel nurse, turned founder and CEO of Nurse First Travel Agency. “A bill rate is simply what a facility pays the staffing agency for each hour a given clinician is working.”

Nurse First prioritizes and advocates for nurses’ needs first and believes in pay transparency, much like Vivian Health. Commisso provided a typical breakdown of where the bill rate goes, with average percentages of allocation for each item as follows:

“This is gross profit, not net profit,” said Commisso. “Agencies will typically have 8-15% net profit margins.”

Just How Much Do Agencies Keep and Why?

Bill rates can vary by hospital in the same city. They can even vary by agency for the same position at the same hospital. Agencies try to negotiate higher pay packages, resulting in higher bill rates because when you make more money, they make more money. As Commisso previously pointed out, the gross profit for the agency from the bill rate is between 20% and 35%. He said, of this amount, agencies must pay (including, but not limited to):

Agencies may also cover the clinician’s benefits, licensing fees, bonuses and other expenditures for putting a travel nurse through an assignment from the original bill rate. Again, agencies typically have 8-15% net profit margins after the clinician receives their earnings and all the bills have been covered from the original bill rate. Most agencies try to take as low a margin as possible, but they must earn some money, as no company can afford to operate for free.

Bill rates aren’t created equally. There are several different types of bill rates, and each may impact travel nurses differently. The agency usually negotiates the bill rate with the healthcare facility as they establish a partnership. Some facilities may only work with one or two staffing agencies, while others may work with numerous agencies simultaneously to get the best rates for themselves. However, three primary types of bill rates exist that you should understand, as Commisso explains below.

“At the time the agency and the facility/healthcare system/MSP executes a Master Service Agreement (MSA), which is typically good for 2 years, there are set bill rates by profession and specialties within those professions. Those are the standardized bill rates.”

“These are bill rates that are relatively similar to a bid bill rate below but differ in the fact that they can be negotiated on a broader spectrum than just an individual submission.”

Commisso explained that submitting clinicians with a bill rate different than the advertised bill rate can benefit the clinician and facility in a few ways, including:

“This will ensure the clinician is getting paid as much as they need if the bill rate originally listed would not provide the pay package it would take for the clinician to work the assignment.

“This benefits the facility due to the simple fact that they would not have to pay as much for the clinician’s services. This also could benefit the clinician as it makes them appear more attractive to the facility and could both increase their likelihood of getting offered the job as well as speed up the time it would take for the facility to extend said offer.” 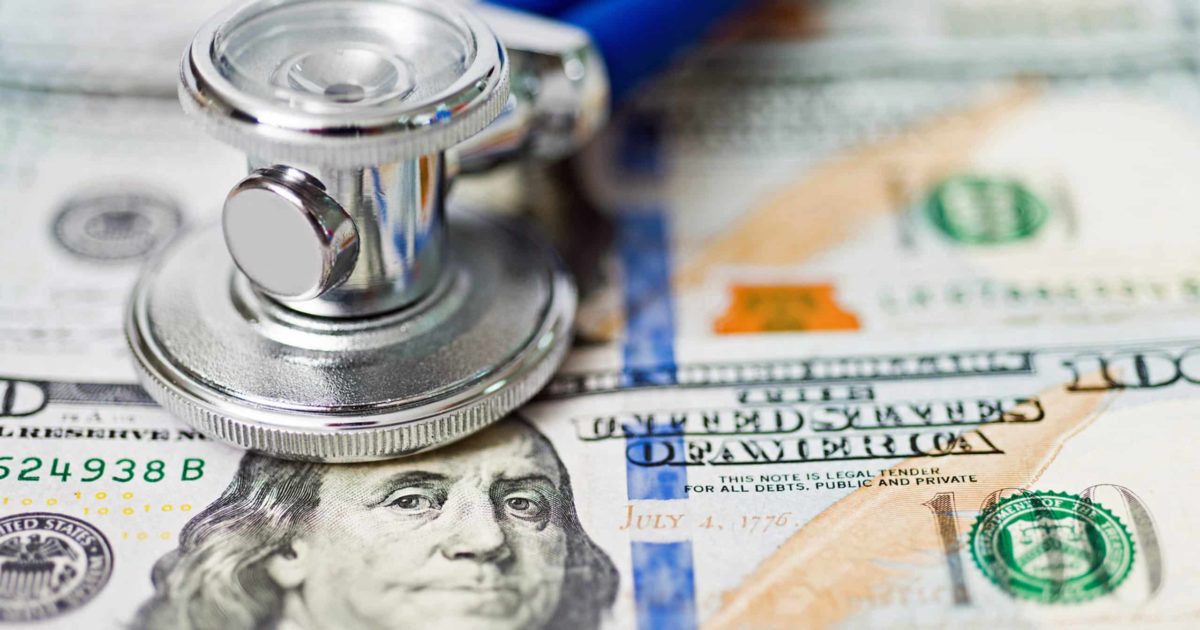 “Simply put, clinicians want to be paid as much as possible, and facilities want the highest quality clinicians to fill their staffing needs as quickly as possible,” Commisso said.

Two common instances where bill rates are negotiated up are:

“Bill rates are typically only negotiated down in order to make a clinician appear more attractive to the facility in hopes of quickly landing an offer to work a particular assignment at the facility.”

Can Travel Nurses Get a Breakdown of the Bill Rate?

There’s long been some controversy over whether travel nurse agencies will supply a breakdown of the bill rate should a travel nurse ask for one while discussing their salary package. The straightforward answer as to whether you’ll receive a breakdown is: maybe. It depends on a couple of factors, but the agency probably isn’t being secretive for a nefarious reason.

However, you’ve likely been told various reasons why you can’t get a breakdown or read differing reasons online, such as clinicians won’t understand why their pay rate is lower than the bill rate and may feel they’re getting cheated. Some sites suggest that the agencies are concerned that travelers will cut out the middleman and contract directly with the hospitals as independent 1099 contractors. This is one we can lay to rest, as RNs in most specialties don’t legally qualify for 1099 work per the IRS definition of an independent contractor.

“From my experience, the only reason the bill rate breakdown is not discussed with the clinician is because the agency believes the clinician will be upset if they learn of ‘how little’ they are getting compensated from the original bill rate,” said Commisso. “Although on the surface, this seems valid, I believe it is a perfect opportunity to instill genuine trust with the clinician by taking it a step further and educating them on where that other portion is actually going and how little of it is making it to the net profit of the agency.”

“This is agency policy dependent, but in my opinion, clinicians most certainly should be encouraged to ask for this information and be formally educated on where every penny goes. This is part of the agency-with-clinician culture I believe our industry needs, as opposed to the agency-versus-clinician culture that has become the perceived norm.”

What About Non-Disclosure Clauses?

Another common reason an agency might give as to why they can’t share bill rates is that the MSP they work with made them sign an agreement containing a non-disclosure clause (NDC) concerning bill rates. If an agency signs an NDC regarding bill rates, they legally can’t disclose this amount. However, this may not be as common as some agencies might lead you to believe.

“I have never experienced one of these clauses in my time running our agency,” Commisso stated. “As a company that hangs our hat on being transparent, I would not sign on with an MSP that requires this to be signed.”

“However, if I were to speculate as to why an MSP would require this NDC, it would likely be to ensure the traveling clinician does not have the ability to notify full-time staffed clinicians at the hospital where they are working of their hourly pay rate to be compared to what the full-time clinician is being paid.”

What’s the Role of an MSP?

As Commisso explained, MSPs are, in essence, the outsourced Human Resources department of the facility as it pertains to their contingent (travel) clinicians. An MSP may be a staffing agency themselves, which means they could find and employ the clinicians filling the facility’s openings instead of working with an independent agency that finds and employs these clinicians. The travel nurse works at the healthcare facility, but the agency is their employer.

“From the facility’s perspective, the benefit of using an MSP is simplicity,” explained Commisso. “They have a single point of contact who fields all communication from the multiple agencies attempting to place clinicians at this facility. Although this does add a layer of communication between the agency and the facility, a large benefit to agencies using MSPs is that they can have access to many facilities by getting one MSP contract as opposed to attempting to get direct contracts with each facility or healthcare system individually.”

Should Travel Nurses Know the Bill Rate before Taking a Contract?

Moira K. McGhee is Vivian’s Content Writer & Editor. As part of the Vivian Health team, she strives to help support the empowerment of nurses and other medical professionals in their pursuits to find top-notch travel, staff, per diem and local contract positions.

Most Popular on Community Hub

You found a contract, but how will you book a room? Check out our top picks for convenient booking online.

You found a contract, but how will you book a room? Check out our top…

Get better prepared for tax season with answers to common questions from two tax professionals.

Get better prepared for tax season with answers to common questions from two tax professionals.

If you’re looking for a healthcare career that pays more, check out these top-paying allied health specialties.

If you’re looking for a healthcare career that pays more, check out these top-paying allied…

Explore where your interests can take you with top career options to reach your goals.

Explore where your interests can take you with top career options to reach your goals.

Nail your dream assignment by revamping your resume to snag employers’ attention.

Nail your dream assignment by revamping your resume to snag employers’ attention.

Career Resources What Are the Nurse Licensure Compact States?

The eNLC lets nurses practice in multiple states with a single license. Learn which states and how you qualify.

The eNLC lets nurses practice in multiple states with a single license. Learn which states…

Learn about tax-free stipends and how much nurses make before and after taxes.

Learn about tax-free stipends and how much nurses make before and after taxes.

Registered nurses can explore new career paths with potentially higher salaries by specializing in a niche.

Career Resources 10 Tips for Healthcare Workers Looking for a Job

Career Resources How to Build a Winning Resume: A Webinar

Land your next nursing job by building a winning nurse resume using these tips.

Land your next nursing job by building a winning nurse resume using these tips.

Learn more about us and why we changed our name to better match our vision.

Learn more about us and why we changed our name to better match our vision.

Vivian Updates How to Make the Most of Vivian Job Proposals

Learn how Vivian can help you easily connect with recruiters and healthcare systems.

Learn how Vivian can help you easily connect with recruiters and healthcare systems.